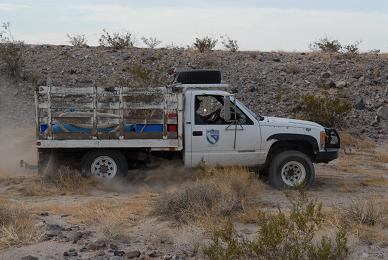 After 60 years of resistance, SCBS has finally purchased our own vehicle.  Previously, we had been using DFG (now DOW) vehicles under our volunteer service agreement.  However, due to the sorry state of the California budget, DFG has not dedicated appropriate funding to maintain and upgrade the DFG vehicles at Camp Cady.  The GMC truck was headed to Bishop for a new set of tires last summer but had a blowout and the subsequent damage was beyond repair - the DFG retired that vehicle.

The motor pool has steadily dwindled over the years from 3 vehicles to 1 Dodge that only works part of the time.

We felt as the board, that it was asking too much of our volunteers to use their personal vehicles without at least putting in some SCBS funds.  Furthermore, few volunteers have the appropriate vehicle to haul water, pumps and tools.  We needed a 1 ton flat bed truck like the DFG vehicles.  Through some last minute phone calls, board member Terry Anderson  secured a significant donation to purchase the SCBS truck.  We managed to find a 2011 Ford F350 with dual rear wheels and a stakebed.  Although it has the V10 and not the more efficient diesel, it was a great bargain.  Many thanks to Mark Dickson for the very generous donation!  Now that we own our own vehicle there are a host of additional costs associated – insurance, fuel and maintenance 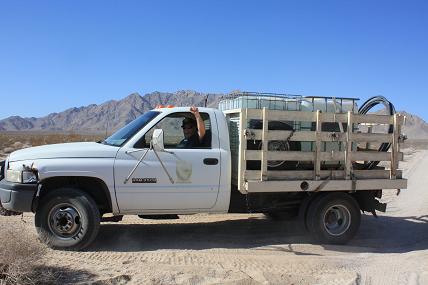 being the primary ones.  If you would like to help support our mission of Desert Bighorn Sheep conservation please consider making a donation to the vehicle maintenance fund. 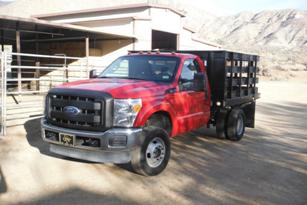 The California Fish and Game journal is the oldest continuously published journal in the state.  It is a place where scientific research can be published in a peer reviewed journal.  Up to now, it was only available by subscription for a nominal fee.  For several years the publication schedule was erratic.  Now it is regularly published and is also available through the DFG website.

You may browse the title or search by key words.

Dr. Vern Bleich (DFG Retired) has taken over as editor in recent years and has managed to get the publication back on a quarterly schedule.  Dr. Bleich is well known among desert bighorn sheep conservation circles and regarded as one of the top experts in his field.  Dr. Bleich is also one of the SCBS Scientific advisors and we are proud that he is able to collaborate with us on our projects.

Personal discussion with a Desert Bighorn

Here follows a very creative imaginary conversation with a desert bighorn sheep about the administrative delays regarding permits that may (or may not) be necessary to repair the Big Gees water development that was destroyed by a flash flood.  Although several quotes below are excerpts from actual emails, on the whole this article should be considered as editorial opinion and humor.  [administrator]

I went out to Big Gee today to check on the sheep and was sitting there when an old Ram came down off the hill and asked me if his herd would be able to get a drink today.  I told him no, it would be at least a week.  He said they'd been without water for two weeks already, in 100 plus temperatures, and he didn't think some of them would make it another week.  He asked what the holdup was.  I told him there were several and tried to read him this email chain, but he kept interrupting  - - -

When I read him the part where [DFG] wrote:  After having thought about this some more, we really need to heed to any environmental compliance on the way.  More importantly, BLM, the managing land agency, needs to be involved. Especially in these times when others are doing what they want, we need to stick to the rules more than ever,

The old Ram asked if we were going to pave or oil the road into the drinker?  I told him I didn’t think so.  He then asked what the environmental compliance BS was about - - - - - if moving a rock out of the way somehow compromised the environment?  I told him apparently so, at least in the eyes of some people.  Then he asked why BLM needed to be involved and pointed out they are the agency that is allowing the utility scale solar rats to scrape off thousands and thousands of acres of desert.  If they didn’t object to that why should they be concerned about people rolling the rocks off a path to allow the water trucks to get into the drinker.  He asked what particular rule we were supposed to stick to that others were ignoring?  Some kind of a rock rolling rule?  I told him I didn’t know - - - -

I started reading the old Ram the email from B__________ [DFG management] but he stopped me after I read the part where they wrote:  As [our biologist] has said, we are supportive of getting repairs done to the drinker and road but need to be certain any and all environmental issues are addressed.  We defer to BLM since this is on their property and assume they are taking responsibility and addressing any potential water quality or discharge issues (permitting requirements).  Given some of the recent litigation associated with flood damage allegedly resulting from road and other construction, we need to make sure we consider all the legal requirements to protect all of our interests.

The old Ram asked me who B_________ was and I told him he was Fish and Game.  He asked why Fish & Game would defer the welfare of the Desert Bighorn Sheep to BLM, the people who regulate rock rolling?  I told him I didn’t know.  He then asked what the potential water quality or discharge issues were?  He asked if we were going to use contaminated water for something?  I told him as far as I knew we didn’t intend to use any water for anything, but sometimes when men are working they pee on the ground.  He shook his head and snorted and said in his opinion B_______ probably squats to pee.  He then asked what the litigation about flood damage was about.  Again I had to tell him I didn’t know.  He asked if the guy who squats to pee realized that Mother Nature just put many-many-millions of gallons of water down that wash and no one had said anything about litigation.  He added that there were no homo sapiens, the breed that might like to bring a lawsuit, within 50 miles of the wash and they certainly wouldn’t be flooded if someone pees on the ground.  (He pronounced our breed “hemorrhoid sap eons” but he was a little cranky and he had big horns, so I didn’t correct him.)  I just told him I didn’t know what water quality/discharge or flood damage had to do with rock rolling.  He then asked how many lanes the road into the drinker would be.  I told him it would be a single path, not a lane, and it would be about 8 feet wide.  He pointed out the mouth of the wash was about a mile, 5,280 feet wide, so 5,272 feet of the wash would be undisturbed - - - - - I told him his calculations seemed to be correct, but what if it was 9 feet wide somewhere?  He just stared at me and I didn’t press the issue.  I read the old Ram the rest of the email and he stared at me again before asking if we were really going to try and drive a truck with a bad radiator to Bishop, and wasn’t that kinda like driving a truck with bad tires to Bishop?  He then asked if we were really going to remove the radiator and drive it to Bishop, then go back and get it at a later time ?  He pointed out there are radiator shops, just as there are tire shops in Barstow, just a few minutes away.  I shrugged - - - - he stared at me for a long time then shook his head and starting walking away, but then he stopped and asked if Fish & Game wasn’t going to do anything other than defer, delay, deceive, debate, declare, blame the deficit, defend themselves and decline, why we even care what they think?  I guess he just doesn’t understand people.

[A very dedicated yet frustrated volunteer.]

Due to an increased desert bighorn population in the Cady Mountains, the Big Gees water development has needed to have a water hauling effort at least once each year.  This amounts to a rather large amount of effort by SCBS during the heat of the summer. 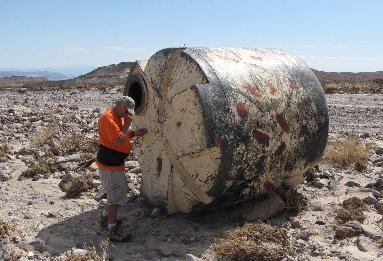 Around July 15 a large rainstorm hit the Mojave Desert.  One of our more active members decided to check the Automata website to see how much water was collected at Big Gees development in the Cady Mountains.  If enough water was collected it might eliminate the need to organize a water hauling project.  The satellite monitoring system indicated that there was no signal from the system.  Two members organized an immediate scouting party to dtermine that status of the development.  They were suprised to discoverd that a large flash flood and scoured the entire canyon for a distance of over 7 miles!  This wash is over 1000 feet wide in places so a huge amount of water had passed through very quickly.  One of the 3 tanks was found broken and tumbled 1.2 miles from the original location.  The drinker box was filled with sediment and the plumbing was broken emptying the tanks of what should have been collected. 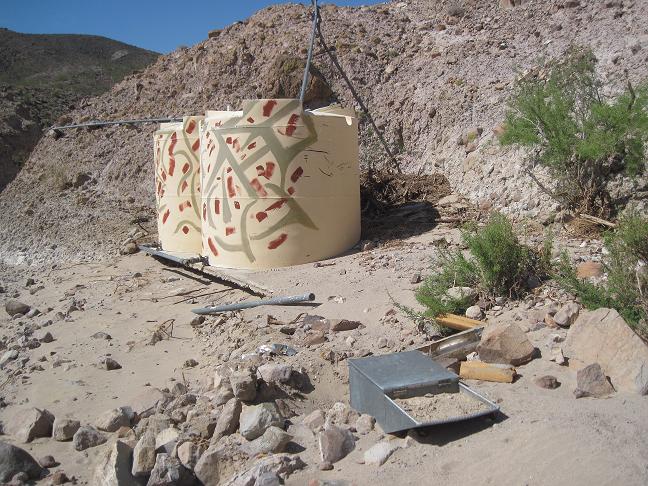 The infrared camera and satellite monitoring system were nowhere to be found.  Not good news, if a solution is not implemented quickly it will be a serious blow to the Cady Mountain desert bighorn sheep herd and set our conservation efforts back several years.  The digital photos are very informative and will allow us to plan an effective repair project.  Many thanks to the immediate scouting efforts of our members! 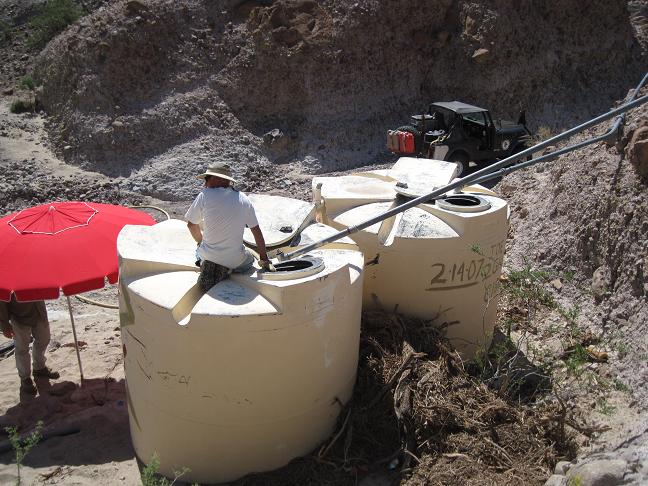 A graduate student from the University of Montana has compiled an extensive website of domestic versus wild bighorn disease issues.  As you may know, this topic is rather emotionally charged but this new website will help get past those issues and focus on the scientific knowledge that is currently documented.  This site is an excellent library.  Please use as a personal reference and to inform your colleagues and acquaintances as necessary.  If you are not familiar with the issue this website is a great place to start.